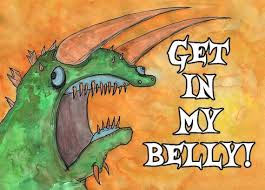 This is the basic premise of J.M. Perkin’s Salt in Wounds. A long time ago, a group of “heroes” and their armies took down the infamous and immortal Tarrasque after a long and bloody battle. The creature, however, refused to die as its regenerative powers continued even after its apparent “death.” Through ritual and powerful magics, thirteen enchanted harpoons were pierced though the beast, sealing it to the ground. Even then, its thrashing threatened the seals and so the fortress of Salziwuun was build around the creature. Elite soldiers were trained to continuously hack at the Tarrasque, keeping it unconscious. It did not take long, however, for the blood, meat, and viscera to accumulate. An enterprising alchemist quickly discovered that the Tarrasque was a source of unending alchemical and magical reagents as well as a source of infinite meat. While the meat was highly dangerous and mutagenic raw, when cooked thoroughly it meant that none would go hungry in what was quickly becoming the City of Salt-in-Wounds.

There are, of course, other issues to be had here, the Tarrasque’s blood destroying the water table and other environmental disasters. But you’ve come here for some classes. The first among them is the God Butcher, those original elite soldiers trained to be able to pierce the hide of the fabled Tarrasque. While they are used to hacking away at a bound target, they have learned out to pierce the toughest defense and dole out the maximum amount of pain in a single blow.

For every God Butcher template, gain +1 Strength and -2 on Saves vs. Mutation

Overpower: The main drive in the God Butcher’s training is how to pierce through the toughest defenses. [Template] points of Defense from armor rather than agility are ignored by any attack made by a God Butcher.

Overcome: Once per day, a God Butcher may replace any check imposed upon them with a Strength Check.

Blood Soaked: God Butchers have experienced so much blood and violence that they are inured fear, gaining a 2 bonus on any fear related checks

Overwhelm: As a standard action, you may observe a creature fight and then make an intelligence check. If you succeed, the next time you deal damage to that creature, you deal 2 extra dice of damage, using whatever your base damage dice is. You may do this [Template] times per day. Additionally, out of combat you can make an intelligence check to spot the weakness in a material (a wood door, a stone foundation, iron bars etc.) and gain an understanding of a weak point or flaw in the object.

Bloody Finish: Once per combat when a God Butcher deals enough damage to kill a target, they may do so in a gruesome enough manner to force another Morale check at a penalty of 2.

Rite of Mutual Recognition: Upon reaching this template, the God Butcher is judged by their order to see if they have the right to be recognized as a Master. In play, recall every time that the character has shown extraordinary resolve in the face of overwhelming odds or shown extraordinary leadership, each worth +1. Also recall every time the character has shown cowardice or taken pointlessly rash actions, each worth -1. Add them up and roll a d20. If the result is below your score, you are recognized as a Master God Butcher, if your result is above your score, you are seen as an unprepared Aspirant. Every level up, an Aspirant may attempt another chance at the Rite, losing their Aspirant ability and gaining the Master ability.

Master: A Master God Butcher receives a loyal apprentice, (1HD, Morale 10, equipment and ability as Template A God Butcher), and may be subject to appropriate awe and respect for their position. If the Apprentice should die or otherwise need replacing, the God Butcher can acquire a new one in one day at any city sized settlement. They furthermore may reduce damage done to themselves once each day as though they possessed a shield as they channel the strength of the Tarrasque.

Aspirant: An Aspirant doesn’t understand that it is technique and wisdom that grants them strength, rather they prefer the crutch of sheer power. As such their method of attack is less focused carving and more wanton hacking. An Aspirant has an additional attack per round.

Probably the more purely martial class I’ve made for GLOG, but sometimes you want to just have something that can hit other things really hard. The the Barbarian is all about soaking damage and making use of Rage and the Fighter is about general prowess and martial trickery, the God Butcher has been molded to pierce defenses through sheer awful might. Out in the adventuring world, they might not last long where combat is often a fail state, but in their occupation as harvesters of meat from the immortal Tarrasque, there are few who can equal them.
Liked it? Take a second to support TheLawfulNeutral on Patreon!