The Bollogg, well a Bollogg. Yes, there are, unfortunately multiple Bollogg about, but luckily you’ll likely only ever encounter one. The smaller Headed Buolloggs are barely distinguishable from other giants of various sizes, but once a Bollogg reaches 2 miles, they invariably remove their incresingly less useful head and continue about their business. Wthout their heads though, Bollogg’s aldread lacking mental capabilities decrease even further and they often immediately walk in the opposite direction in search of their heads. The greatest known Bollogg, the Mega Bollogg, stood more than 15 miles in height and its mountain sized head still sleeps in the midst of the Humoungous Mountains outside of Atlantis.

Fighting a Bollogg isn’t really a feasible option, though I guess you can alwys try. For the 2 mile tall variety, it will take just under 2 minutes to realize something has stabbed its toe, and it would take over 13 minutes for the 15 mile tall variety, due to the limit of the speed of signal transference. Their immense size means that with every step the 2 mile tall variety can cover 4400 feet per step or .83 miles. The 15 miles variety can cover six and a quarter miles in a single step! They are, however, extraordinarily ponderous in their movements and a single step can take around 10 minutes (or a full Turn.)

Any attacks against the Bollogg automatically hit, but any attack that does less than a full HD of damage is unlikely to be noticed.

Blood Drain: A Bollogg Flea bites for 1d3 damage. A successful hit means the Bollogg Flea is attached and will deal 1d3 additional damage each round until it or its victim is dead.

Bollogg Fleas are, luckily, a rarity as they primarily feed off of the massive Bolloggs and require no other nourishment. However they will occasionally leap from the Bollogg in search for a new flavor before coming back to their mobile home. Bollogg fleas will also attack anything that happens to be climbing a Bollogg, as Adventurers are wont to do.

While they are able to walk about at the speed of a person, they can also leap every 1d6 rounds and cover 960 feet (assuming 8 foot long flea and normal flea’s ability to leap 120 their body length). Targets being lept at must Save vs. Dex or be knocked prone and subject to the Blood Drain attack. 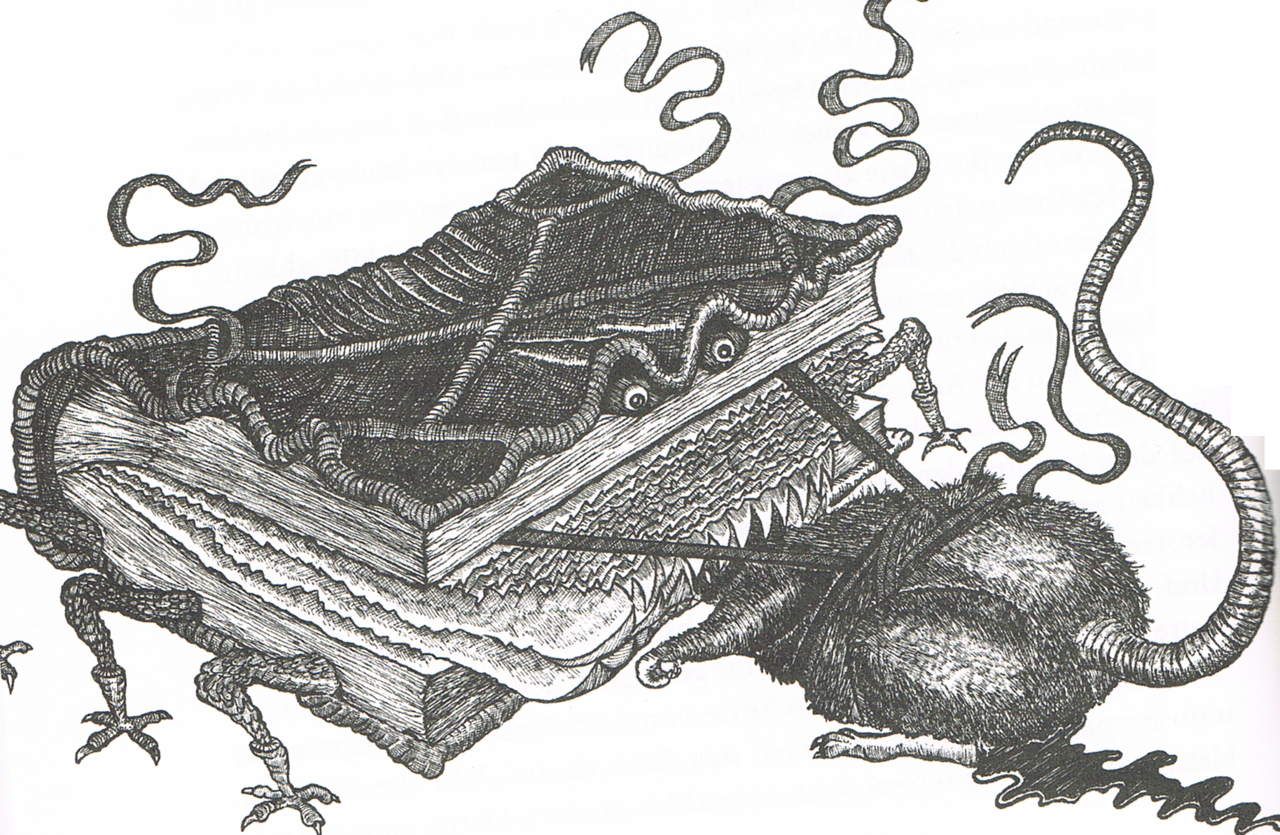 Flying Dive: Flying Animatomes can dive and bludgeon a target for 1 damage at the risk of being susceptible to a melee attack.

Constrict: Snake-like Animatomes can constrict a target for 1d6 damage per round.

Venomous Bite: Spider-like Animatomes can bite for 1d6 damage plus Save vs. poison for an equal amount of damage on Constitution.

Animatomes were one of the early works of the Bookholm Bookemists (something between an Alchemist and an Antiquarian). Who knows why anyone would want to bring a book to life, but it would seem the Bookemists didn’t achieve the final result they wanted. This resulted in entire libraries worth of Animatomes to be dumped into catacombs beneath Bookholm, though it is possible many escaped into the wilds. These animate books are of approximately animal intelligence and tend to congregate in libraries of mixed type. While not normally actively aggressive towards anything bigger than a rat, they will act en masse to protect their territory.

Hallucinogenic Webbing: The Spider-Witch’s territory is strewn with countless miles of sticky silk webbing, halving the speed of all who enter it to avoid getting caught. To make matters worse, the web emits a hallucinogenic pheromone that makes it appear that the target’s greatest dreams have come true. Those entering the Spider-Witch’s territory must Save (vs. Poison or Wisdom or some such) to avoid being caught in a beautiful illusion then willing toss themselves into the entangling webs. Entangled victims have -4 to Def and Attack and are incapable of movement. Nothing but water can dissolve the webbing.

Bite: The Spider-Witch bites for 1d6+3 Damage and injects a poison that causes muscles to liquefy, dealing an additional 1d6 Strength Damage on a failed save.

The Spider-Witch is a hideous being presumably from another dimension, as its only known habitat is the Dimensional Hiatus strewn Huge Forest. It is among the creatures of Zamonia known for its wholly unfair hunting tactics, that is by entrapping their victims in a state of rapture then sucking out their juices. We would like to hope that there is only one left in existence, but such might be folly. 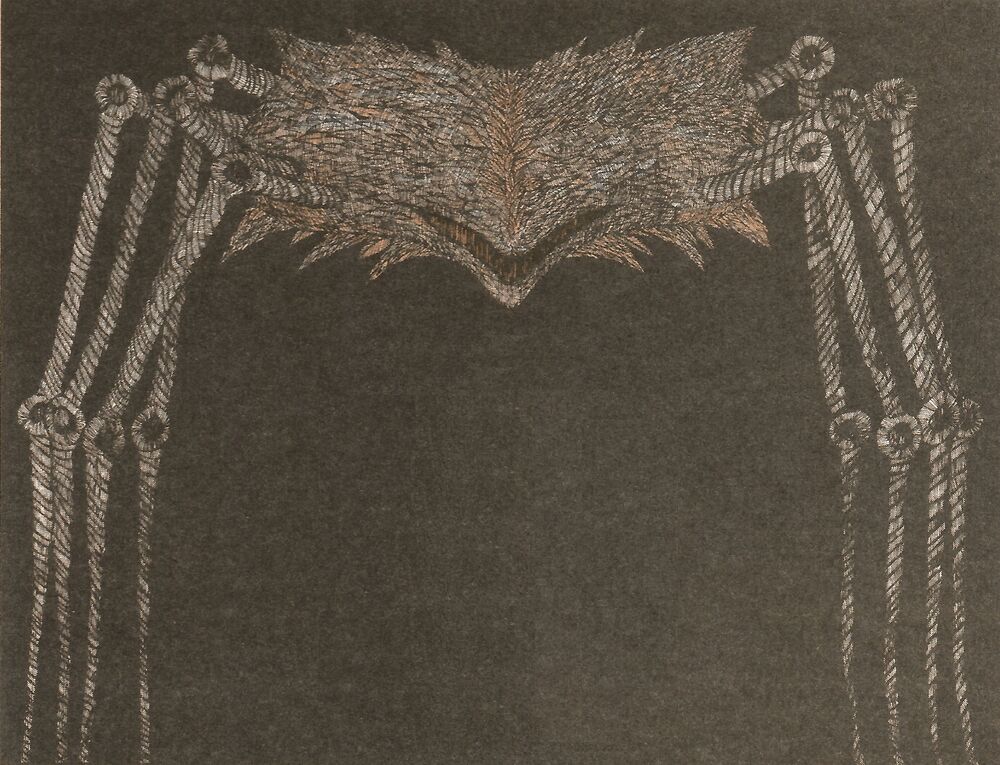 5HD Nurn
Appearance: A body like a massive red autumn canopy and eight wooden spider-like legs
Wants: To consume, to procreate
Armour: As Chain
Move: 2x Normal
Morale: 8
Damage: 1d6/1d6 Claws- If both claws hit, the Nurn will attempt to drag the target into their mouth for an additional 1d6 damage per round.

The Nurn is an awful form of creature that arose from the dark woods of Nurn Forest. The forest was the site of countless battles and of countless hangings, leaving it strewn with the dead and dying for centuries. The blood and ill final thoughts of these dead men seeped into the ground and gave birth to the Nurns. Masters of stealth within their own domain, Nurns camouflage themselves among the trees and sway like limbs in the wind. Players may be required to pass a Save to notice a Nurn before it strikes. Young Nurns, called Leafkins, appear as small mobile red leaves and can release an extremely loud call to summon its parents. 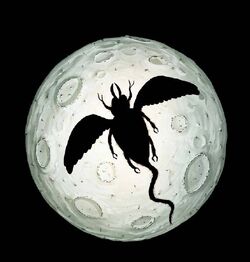 1HD Kackertratts
Appearance: Take the worst parts of a rat, a pigeon, and a cockroach, combine them together and make it 6′ long and prone to swarming.
Wants: To be god awful pests
Armour: As Leather
Move: Normal, 1/2 Normal Flying
Morale: 12
Damage: 1d6 Bite


Kackertratts are among the most loathsome of Zamonia’s inhabitants, barring Troglotrolls, and are made up of the worst bits of rats, pigeons, and cockroaches. Who knows if they are natural or if they escaped from an Alchemist’s lab, but today they a pest in many major cities, especially Atlantis. They appear in swarms of 2d6 (exploding on 6) and are willing to fight to the death, if only because they are too stupid to retreat. A unique part of their idiocy is that they assume anything in fluid motion is water and therefore not a food source. Continuous Dex saves or some other form of “fluid motion” such as expert dancing can be used to sneak by in plain sight of Kackertratts. 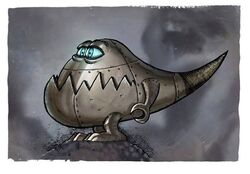 The Mountain Maggot is native to the iron rich Gloomburg mountains where is spends most of its time literally eating through the mountains. As such the Gloomburgs are a maze of worm tunnels with sense to their paths. The Mountain Maggot gets all of its nutritional needs from eating the minerals and iron in their habitat and thus tend not to be aggressive or even interested in any fleshy creatures they might encounter. That said, if they are somehow damaged, they will act to eat targets with the most amount of metal first. A Mountain Maggot outside of the Gloomburgs might be starved (Halved everything) and be more willing to attack adventurers to eat their gear.

One thought on “Zamonian Encounters”