When you don’t want the deep sea encounters to all be shoggoths and Cthulhu. if you want to ramp up the whimsey, affix -maid to the end of some of these and get the ugliest spawns of Neptune you’ll every have the misfortune to see. 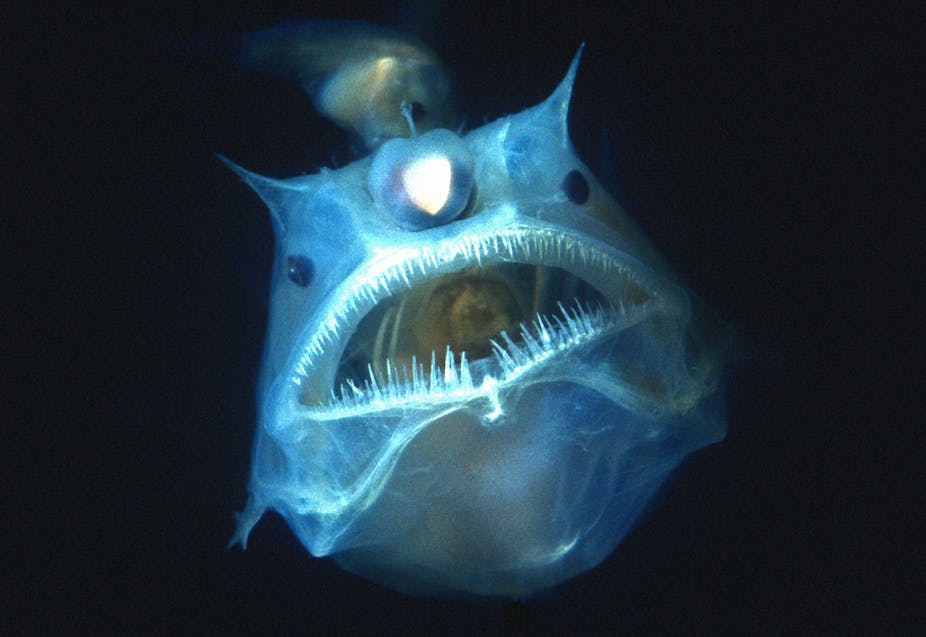 1 Marine Snow- Not the most exciting of encounters as the sea is rife with it. Marine Snow is the particulate detritus of the upper zones, everything that the Pelagic zone lost or doesn’t want. This particular area is especially thick with it reducing vision to nearly nothing. Beware of using any necromatic energies here lest the detritus of a million million living and dead creatures form into a Rot Elemental.

2 Osedax- A strange worm found primarily among whale falls, also known as the Zombie Worm. These creatures burrow into bone to ingest the nutrition rich marrow within. Sea Witches have bred a form of Osedax that seeks living prey instead, burrowing into them and taking control of their skeletons. It is not unknown for so-called Ghost Pirate ships to be crewed by Osedax controlled skeletons looking for fresh marrow.

3 Hagfish- An ancient ungodly jawless eel-adjacent fish that is known primarily for its ability to tie itself in knots and create copious amounts of slime. A single standard Hagfish can produce around 5 gallons of slime at a moment’s notice. This sticky substance clogs gills, impedes movement, and causes general confusion and panic. Hagfish slime is also an excellent egg substitute and it is not uncommon for them to be kept for culinary purposes by various undersea races. There is a 25% of any Hagfish encountered is actually a larval Aboleth whose slime in small doses is a psychedelic drug with prophetic properties and in larger doses causes the horrid flesh diseases of their adult forms.

4 WHALE FALL- Oh most glorious of feasts! A ocean giant has been felled and fallen to the depths. This temporary ecosystem attracts many scores of creatures from the myriad starfish scavengers to hagfish and sharks, various strange worms and weird mollusks. Anything that could conceivably be under the sea might show up here for the feast. It is not unknown for Whale Falls to rise as Bakekujira on the full moon following their complete decomposition. 6 Zood– A water bear the size of a tank. Normally preferring life on surface mudflats, some Zood scavenge across the abyssal plains. Where there are Zood, there are explosive deposits of methane.

7 Fairy Salp Circle- Salps are jelly-like colonial organisms that form long chains in the ocean. Each individual creature within the organism specialize acting to assist the collective in feeding, propulsion, defense, etc. A Fairy Salp Circle is the aquatic equivalent to the toadstool ring in the forest, the Fae commandeer a natural circle and turn it into a portal to their realm.

8 Praya dubia or Giant Siphonophore- Similar to Salps, these massively long creatures are formed of many specialized organisms. Unlike the Salp, which is content to passively ingest plankton, the Giant Siphonophore seeks fertile waters and drops long tendrils to paralyze and catch their prey. It produces a bright blue bioluminescent light to attract its prey, primarily made up of other gelatinous organisms, crabs, and small fish. This one happens to also have achieved a boltzmann brain state and is considered the sea’s greatest philosopher.

9 Koromodako- An octopus that is mere centimeters in size, the Koromodako usually survives on hunting singular zooplankton which can sustain it for long periods. However when a Koromodako is threatened in any way, it can expand to massive Kraken-like sizes for sort periods of time, sucking everything in the vicinity into its all encompassing maw. Afterwards it compresses back to its formally tiny size. Wizards theorize that Koromodako are actually a relative of the Bag of Devouring and have been able to create rather small Bags of Holding from their harvest corpses.

10 Giant Octopus- Not actually interested in eating you, this giant octopus has recently fed and is more curious than predatory. Its skin pulses the deep crimson of excitement as it wraps this tentacles around the party, tasting and feeling them with their suckers. It desperately wants to be friends with anything that isn’t immediately delicious or finds it delicious, but it isn’t particularly equipped to communicate that.

11 Gargantuan Isopod- Like seriously giant, not those bulldog sized pillbugs, more like the size of a city block. Still primarily bottom feeders, the massive specimens are often dominated or tamed and turned into undersea tenements, fortresses, or siege engines.

12 Male Angler Fish- These little guys are the size of your thumb and desperately wants to mate with your light source. If they successfully attach to your light source, it will over the course of 24 transform hours into a large Female Angler Fish with a lamp of equal strength to the original light source. Unless impeded in some way, it will then swim off to do whatever it is Anglers do in their spare time.

13 Lobster- There is, as far as we know, no upper limit to the size of a Lobster. When a lobster is encountered roll a d4 that explodes on 4. For every 4 rolled increase the size category of the lobster. A base lobster is about the size of a small cat.

14 Umibōzu– The legendary Sea Monks, truly gargantuan creatures that sailors ordinarily only witness an ink black head and glaring white eyes of. This far down, however, you are encountering its shins, which are more or less two slow moving black pillars about the width of your average wizard’s tower. It likely wont notice any attack smaller than ballista bolt, but its got is own ecosystem of interesting parasites, corals, and detritus feeders.

15. Bakunawa- Might be related to Jormungandr, the Bakunawa is a horn-nosed sea serpent of astonishing size. You see, there was once 7 moons in the sky each of increasing beauty. The Bakunawa was incredibly jealous and swallowed them one by one until there was only the one left. Luckily for the tides and young lovers, Bakunawa is incredibly scared by loud sounds. Once it took many villages worth of noise to keep it under the sea, but the modern age makes so much sound naturally that Bakunawa hasn’t surfaced in a generation.

16. Loop of Jormungandr- Its too big, it wraps around the world and might very well be an incarnation of the very currents of the world. You are unlikely to ever meet Jormungandr, but you might meet a piece of it. Its a wall of serpentine flesh the size of a continental shelf and the color of your thumbs pressed against your closed eyelids. It slivers between the mundane and the divine realms, you blink and its gone!

17. Herd of Capricorn- These capricious sea-goats roam the seas in wild herds, eating anything that can’t put up some sort of defense. Sometimes a domesticated herd is tended to by one of the intelligent sea races, mainly for their milk and rarely for their meat. Sea-Goats are, according to legend, all ultimately destined to be eaten by The Leviathan.

18. Lesser Sea Monks- Man-sized creatures similar to the Umibozu, these inky nondescript creatures often follow in the wake of an Umibozu whom they consider somewhere between an abbot and a mobile temple. Their interests lie entirely within the contemplation of the Flow, an understanding of the universe based upon the currents of the sea.

19. The Hot Tub of Depair!- A thirty foot wide super-saline lake sitting on the seafloor, the pickled corpses of crabs and starfish surrounding its perimeter. This water is so dense that it is unable to mix with the rest of the water around it, creating its own weird waves in the wind-like currents around it. Hundreds of mussels cluster around its edge, filtering nutrients from the super heated chemical stew. The truth is, the opposite side of this lake is a the Doppelsea of the Doppelworld where doppelgangers live their doppelives. Doppelgangers in our world are criminals thrown or escaped through this lake.

20. 100d100 Jellyfish- Just so fucken many jellyfish, so many! Use the generator below to make them jellies!