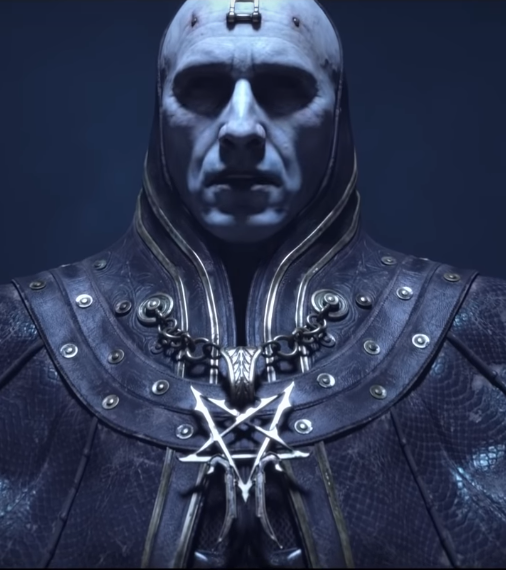 Investment: Each template, the Rathman Necromancer gains +1 Investment point representing the focusing of their studies. You may only Invest in paths you have at least the Apprentice rank in. Each path notes in their description below what the Investment does. Path of the Summoner

A Necromancer’s first and foremost dedication is to the Great Cycle of Being and part of that is realizing that Death is merely part of that cycle. An adherent of the Path of Summoning learns to to call upon the energy that flows in this cycle and invest this energy into creating a semblance of life.

The Summoner at Template A can call upon a single Skeleton from any corpse that would leave a skeleton. This skeleton has 1 HD, armor as leather, and has a 1d6 Claw attack. Any time the Summoner creates a new Skeleton, the previous one crumbles into ash. Skeletons are incapable of following any command more complex than Stand, Follow, and Attack.
The Summoner at Template B can call upon up to two Skeletons or a Golem (Clay).

The Clay Golem is 2 HD, Strength equal to your Con+2, armor as chain, and a 1d6+2 Slam attack. The Clay Golem is about the size of an ogre and can follow simple single syllable instructions up to 3 words such as “Guard this door” or “Lift this rock” etc.
The Summoner at Template C can call upon up to four skeletons or two Mage Skeletons and a Golem (Clay or Blood).

Wizard’s teeth are full of magic, so skeletons raised from Wizards retain a certain amount of that magical energy. Mage Skeletons have 1 HD, no armor, a 1d6 claw attack and can sling a bolt of entropic magic  with a 60′ range for 1d6 damage.

An Iron Golem is created through the sacrifice of an item made primary from Iron. The quality of the item effects the Golem’s power, it possesses 1+1 HD for every 50 GP the item is worth, minimum 1HD. Furthermore it possess abilities relevant to the item sacrificed. A sword becomes a Golem with sword arms dealing damage as that sword. A hunk of rusted scrap produces a fragile Golem. A magic fire sword results in a super-heated Golem that deals additional fire damage etc. The baseline Iron Golem is as the Clay with Plate armor.

A Revenant, as opposed to a Zombie, is a risen corpse that retains the skills and abilities that it had in life. A Necromancer may raise Revenants a up to 4 1 HD Revenants or may pool the power to create fewer, stronger Revenants (two 2 HD, one 3HD/one 1HD, one 4HD). Other Necromancer summons last until dismissed or destroyed, but Revenant’s require so much energy that they only last 3 minutes before crumbling to useless ash.

Hexcrafters seek to disrupt the flow of energy in living beings instead of manipulating that flow to control the dead. The first template plus every Investment Point gains 1MD as a Wizard for the purposes of casting spells.

The Hexcrafter at Template A is capable of manipulating target’s perception and sense of pain.

The targeted creature’s vision is dimmed but they are not blinded, they simply don’t notice any changes to what they see until after the duration is over. A creature being pursued by the target will still be seen by the target until something blocks that line of sight.

The targeted creature is wounded more grievously by attacks. The next physical attack within [dice] round to hit the creature automatically does double damage.
The Hexcrafter at Template B learns to manipulate target’s mental and physical suffering.

Terror
R: 60′ Cone T: [sum] HD Creatures D: [dice] Rounds
Targeted creatures must make a morale check or flee in fear from the caster. There is a 50% chance that the targets drop whatever they are holding while in a blind panic.

Iron Maiden
R: 30′ T: [sum] HD Creature D: [dice] Rounds
Target creature is cursed to have all physical melee damage it deals reflected upon it two fold. This does not affect ranged or purely magical attacks.
The Hexcrafter at Template C learns to further muddle their target’s minds and to leech away their lifeforce.

Confuse
R: 30′ T: [sum] HD Creature D: [dice] Rounds
Target creature’s thoughts are invaded by a multitude of malevolent voices, urging them to acts of violence to all those around them. The target automatically attacks the closest creature to the best of their ability each round. If the target of their attack would be an ally, they may make a Save (vs. Charm or Wisdom or something) to resist attacking the ally and instead attack themselves.
Life Tap
R: 30′ T: [sum] HD Creature D: 2*[dice] Rounds
Target creature is cursed to that all damage dealt by the Necromancer to target for the duration of the spell heals the Necromancer for an equal amount.
The Hexcrafter at Template D learns to cause their targets to become loathsome pitiful shadows of themselves.

A curse placed upon a single creature makes them appear as a universally loathed being. Any creature including former allies who see the target must Save (vs. Magic or Wisdom etc.) or be convinced that the target is their worst enemy. Creatures failing this Save are compelled to attack, harass, or otherwise antagonize that target to the best of their ability.

Save (vs. Death or Con) Negates. The creature appears to age at your touch, becoming wizened and arthritic. The target loses half of its HP and For the duration of the spell, the target’s Strength and Movement are also halved. If 3 or more [dice] are invested the penalties are permanent. This spell may affect immortal creatures or creatures that get stronger with age (e.g. Dragons) differently. An object touched by this spell is aged [sum] years, which may cause it to warp, rot, or become otherwise brittle. 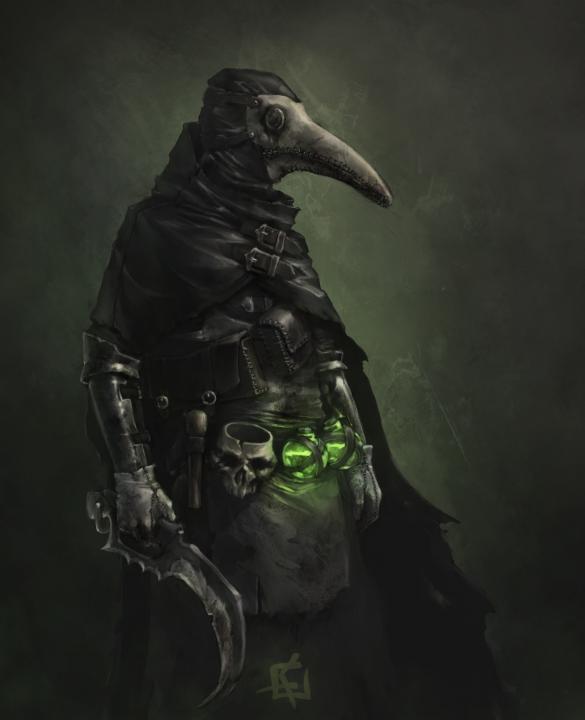 Some Necromancers take a more directly offensive path, seeking to punish those who would disrupt the Great Cycle of Being. The first template plus every Investment Point gains 1MD as a Wizard for the purposes of casting spells

The Boneturner at Template A gains their first taste of power from the Trang’Oul, the Dragon of Balance that founded their order.

Bone Armor
R: Personal T: Self D: 1 hour per [dice]
You must have at least a full human sized skeleton available to cast this spell, be it from a cemetery or a recently felled foe. At your command, the skeleton breaks down into its component parts and becomes a spiraling barrier orbiting around you. The Armor has [sum] HP and every physical attack that would hit the necromancer hits the Armor instead.

Teeth
R: 200 T: 30′ cone D: 0
The necromancer calls forth the teeth of Trang’Oul, the dragon upon whose back the world sits.The teeth fly forth and take a jab into the targets. The spell calls for [sum]+[dice] teeth that fire off in a 30′ cone spread, each tooth dealing 1 damage. Any targets within the cone Save vs. Dex or take damage spread out by the Necromancer. E.x. Necromancer rolls 1 [dice] for a [sum] of 6, 3 targets are in the cone. Necromancer may focus all 7 damage on one target or spread it amongst the three.

The Boneturner at Template B learns to manipulate the deadly miasmas of death to explosive and deadly effects.


Poison Dagger
R: Touch T: Dagger D: 1 Day or until used
You infuse a dagger with a necrotic poison. The next creature to take damage from the dagger must Save vs. Poison or take [dice]d6 additional damage. If strike a poisonous creature, you may choose to instead coat your dagger in their poison instead.

The Boneturner at Template C are further blessed by the power of Tran’Oul, learning to call forth further projects of their patron’s body.


Bone Spear
R: 200′ T: 200′ Line D: 0
The Necromancer calls forth the Talon of Trang’Oul, a single long spear of sharpened bone. The spear fires forward dealing [sum] damage to any target in its path. If a target is killed and there is remaining damage, the spear continues forward to the next target in the line. The spear can move through [dice] targets in this way.

You summon forth huge jutting ribs to form a 10’ by 10’ panel per [dice]. You can mold the wall, similar to cutting holes and notches in a sheet of paper. The wall has Defense as Leather and [dice] HD. If it is horizontal, the wall must be anchored on at least 2 sides. Creatures attempting to climb over this wall must Save (Vs. Dex or something) or take 1d6 damage from the many sharpened bones.
The Boneturner at Template D learns to call forth the very manifestations of death and decay to plague their enemies.

Bone Spirit
R: 50′ radius T: 1 Creature D: 0
The Necromancer calls forth a Wraith from the spirit world. Unlike the summoning abilities of the Summoner path Necromancer, the Wraith called by this spell is not under the strict control of the caster. The caster may designate [dice] creatures to be protected from the Wraith, including the caster. The Wraith targets 1 random valid target and rushes in to tear a piece of their soul away, dealing [sum] damage that cannot be healed by non-magical means.


Poison Nova
R: 50′ Radius T: Living, Breathing Creatures D: [Sum] rounds
The Necromancer transmutates the very air around them into a poisonous miasma. Targets within the field of effect must Save vs. Poison or [sum]/2 damage and begin to suffocate. Most creatures can hold their breath for CON rounds or half CON if unprepared. If the Necromancer has a dose of a poison on hand, they may substitute the spell’s normal effect for the effects of that poison per GM approval.
Liked it? Take a second to support TheLawfulNeutral on Patreon!

2 thoughts on “Necromancer for a Goat”